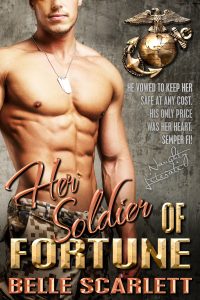 Leia has no idea who ex-Marine Major Tate McIntyre is when he saves her life in a dark alley. Yet Tate’s certain Leia is his to have, hold, and protect. He vows to keep her safe at any cost. His only price is her heart. Semper Fi!
Copyright © Belle Scarlett, 2019

“You’re coming with me. No arguments, Leia. Now.”

Leia Lightoller tore her dazed gaze from the unconscious mugger sprawled at her feet in the dark alley to stare in shock at the muscular stranger with the low, gravel voice who towered over her.

Her smelly, wiry attacker on the oily, wet asphalt emitted a low groan. Her eyes ran up and down his curled up form on the ground.

Only seconds earlier, the fallen would-be thief had held a knife to her throat in the dim alley as he’d tried to snatch the purse off her shoulder. Such a little guy, really. He had seemed a lot bigger a few seconds ago. His blade at her neck had probably seemed to add a few inches to his stature, Leia acknowledged to herself vaguely.

With a surreal sense of clinical detachment, Leia noted her rapid pulse, her shallow breaths, and the dizziness that soon followed. She sensibly told herself to stop that nonsense right now before she blacked out.

Just a bit of shock. Must get a grip. Breathe, Leia, just breathe. Shake it off. You’ve seen worse.

Immediately, she felt her blood pressure decrease as her stress abated. The dark spots before her eyes cleared. She was instantly thankful for her good training that made her body do what her brain told it to.

Her tall rescuer, if that was what he was, grabbed her wrist and pulled her away from his fallen adversary now writhing in semi-conscious pain in the middle of a chilly puddle.

Disliking being manhandled so soon after nearly having her throat slashed, Leia instinctively tried to wrest her hand back from his iron grip. She may as well have tried to pull King Arthur’s Excalibur from the stone.

Quelling her resistance, her stranger hauled her close to his hard body. She felt every corded muscle and large sinew under his dark, open overcoat. There was an also an unexpected but undeniably substantial bulge at the crotch of his slacks.

She inhaled sharply at their full-body, physical contact, and firmly told her knees to stop feeling like buckling all of the sudden. A flood of random thoughts hit her brain nearly at once.

What the hell? Who is this guy? Damn. He smells good… This is ridiculous.

His spicy, masculine scent mixed with winter rain assailed her senses and made her blood pump hard again but, oddly enough, not in panic this time. If anything, his personal scent stimulated yet reassured her excited senses, rather than alarmed them. His alluring essence was somehow familiar, but she couldn’t understand why.

She breathed in deeply again to calm her rioting pulse only to inhale her own body’s sex pheromones, triggered by the sheer proximity of the man who held her in his grip, making her pulse pound a bit harder. At this close range, if her nose could detect her own arousal, so must his, she reasoned. She felt red heat invade her cheeks at the notion.

A warm shiver skated up her spine when she felt her stranger-slash-hero’s large hand wrap around her waist, spanning it easily with his long fingers.

What was he doing? Sure, he had just saved her from a creep in a dark alley, but she wondered if she hadn’t sprung headlong from the proverbial frying pan straight into the bonfire.

“Wh-who are you? How do you know me? What’s going on?” Leia barely recognized her own husky voice in her ears as the tall stranger pulled her down the alley toward a parked car. It was haloed under an electric lamp on the curb of Decatur Street.

The sound of good, live jazz filtered out from a nearby, random open doorway, as it always did in the French Quarter at any time of day or night.

She dug her cream-colored pumps into the damp pavement.

“Hey, I asked you some questions!”

Her world abruptly turned upside down, both literally and figuratively, as the man who had taken out her mugger slung her over one broad shoulder. She stifled an undignified yelp.

“No time to explain, sweetheart. You’re coming with me. Your friend on the ground back there isn’t working alone.”

He unceremoniously dumped her into the passenger seat of the his non-descript, four-door sedan.

Before she could catch her breath, his long legs carried him around the nose of the vehicle and into the driver seat. Stunned, she scrambled for the door handle even as he clicked her seatbelt into place.

The caveman behind the wheel pressed the child-lock on his side so she couldn’t get out.

“Let me go,” she repeated doggedly.

“Buckle up, sweetheart. It’s going to be a bumpy ride.”

She stared at him in the in the near darkness as he put the car in gear and peeled out from the curb.

The wet street signs of the French Quarter flashed by as her rescuer-turned-kidnapper maneuvered the car expertly through the late-night traffic. Leia sat hunched in her seat and quietly monitored every turn and landmark, memorizing their route, glad she had been trained to be hyper-observant. The moment she managed to escape she would head to the nearest police station.

The green awnings of Café Du Monde appeared ahead through the rain-dotted windshield. Leia could almost smell the chicory coffee and mouth-watering, powdered sugar beignets that the world-famous café had been making just a block or so up from the mighty Mississippi River on Decatur Street since 1862. She loved Café Du Monde, she decided at the same moment she realized she hadn’t eaten since the wedding breakfast that morning.

“Hey, you hungry?” His deep voice caressed her ear, reading her mind. Her tummy growled in response before she could tell it not to.

“Sorry. You’re on a need to know basis for the moment, love. And right now, all you need to know is I’m your knight in shining armor.” He sounded infuriatingly self-satisfied at the pronouncement. Leia caught a glimpse of his maddening grin as a streetlamp flashed past the car window.

“Well, Mister Knight, sir, I need to know why you’ve taken me hostage!”

“I haven’t. Not really. Although that could be our cover story for now,” he added under his breath.

“Not really? You’ve taken me against my will – “

“After saving your life,” he interjected patiently.

“Fine, sure, thanks for that. But now you won’t release me after repeated appeals –“

“Would hardly be safe for you on your own around here at the moment,” he demurred.

“And you are now driving me to some unknown destination, again, against my will.”

“What’s your point, Leia?” He seemed genuinely curious to know.

“’That ‘taken against my will’ is pretty much the textbook definition of ‘hostage’!” She exploded.

“Well, if you want to get technical about it. But in this case, it’s for your own good. Even if you don’t realize it yet.”

Leia squeezed her eyes shut. She could only hope he wasn’t some kind of escaped mental patient with a savior complex.

“I swear, first chance I get, I’m going to scream for help,” she whispered.

“Open your pretty blue eyes, woman. You’ve already got all the help you need right here.” Once again, the sheer confidence in his voice held some mysterious power to put her jumpy nerves at ease. Despite every tumultuous moment since meeting him only a few minutes ago, she wanted to envelope herself deep inside that soft, low growl in his tones that stroked and warmed her on this rainy night like a hearth fire. It seemed as familiar as her own, somehow.

Where had she heard that voice before?