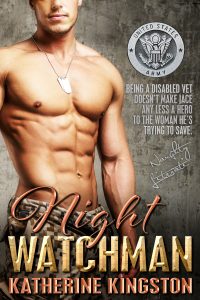 Jace Hallowell scanned the feeds from various cameras around the business park, stopping when unexpected motion on one of them caught his attention. A car entering the parking lot at two-fifteen in the morning was unusual but not necessarily alarming. People did sometimes show up for work at odd hours. What the vehicle did next, though, set off a few warning bells in his head. Instead of moving into one of the spaces close to a door, the driver parked in a corner well away from the nearest building, in the shadow of several large trees.

After a quick glance at the other screens, all showing the usual nothing, he watched the car. The camera’s resolution wasn’t great and didn’t get much better when he tried to focus in, but he could see the door opening and a figure wearing a long coat get out. He strained for a better look and decided it was probably a woman, based on the way she walked. Intelligent caution could account for the swinging back and forth of her head, but he sensed something more tense and nervous in the movement.

She cleared the camera’s range near the door to building D. He checked a couple of other monitors focused on that area and got one that showed her using a card to enter. No alarms went off, so she had legitimate credentials. He brought up a feed from inside that followed her movement as she walked down the hall and into an elevator. Another camera showed her getting off on the third floor and heading down the hall, where she used a key to enter one of the offices, after once again glancing both ways to be sure no one was around. They had no camera inside the office he could access.

He sat back and considered what to do next. She’d done nothing obviously wrong and he had no real reason for his suspicions other than a gut feeling. His job description as a security officer for NightWatchers Inc. didn’t offer much help. They weren’t expected to do a lot of thinking, nor were they supposed to confront problems. Mostly it was watching and alerting the police if alarms went off or anything clearly out of line occurred. But they could investigate further anything that seemed suspicious.

“Bill,” he called. His co-worker was already ten minutes past their allotted fifteen-minute break time. “I need to go check something out.”

Bill grumbled from the room behind him, and a chair creaked as he heaved himself to his feet. Bill was probably thirty years older than Jace, three inches shorter, and a hundred pounds heavier. He suffered from multiple health issues and probably should’ve retired several years ago. Either he couldn’t afford it or couldn’t figure out what else he’d do with himself.

Bill waddled into the room and Jace got up from his chair, wincing as his prosthetic leg pushed against the stump. He had the usual twinge of self-pity and reminded himself, as always, to be grateful he was alive. Two members of his company in Afghanistan hadn’t been so fortunate.

“Should be back in a few minutes.” Jace grabbed his jacket and a set of keys from hooks on the wall. He pointed to the screen where the parked car still showed. “Probably nothing at all, but someone just parked in a far corner and went into Building D. Used a card and didn’t set off any alarms, but it looks fishy.”

Bill nodded and plopped himself in the chair Jace had just vacated. “Knock yourself out.”

“Text me if you see her come out of the office or the building before I get there.”

He hoped Bill’s grunt meant he understood and would do it.